Our walk-in customer service and payment lobby is closed until further notice.  Please click Payment Options for a listing of all the ways you can pay your bill or call us at 853.5700.

Long before Carvins Cove became the primary drinking water source for much of the Roanoke Valley and a favorite play area for recreationalist, it was the homestead of William Carvin, a  Welsh man,  and later a thriving community called the Happy Valley.

July 25, 1746 William Carvin receives a land grant of 150 acres along Carvins Creek. Part of the land would later become Hollins University and the land behind the dam would become known as the Happy Valley community. 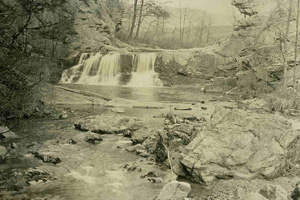 The Roanoke Water Works announces that the Virginia Company will build a $700,000 dam at the Falls on Carvins Creek to impound six-billion gallons of water. W.W. Boxley Construction Company completed work on the 80-foot high dam in 1928. (Photo of The Falls, site of the future Carvins Cove dam, taken November 25, 1926)

August 1936 The Virginia Company, financially devastated by a significant drought and the Great Depression, is purchased by the Roanoke Water Works for $1.


April 28, 1938 The City of Roanoke pays $4,523,437 for all lands held by the Roanoke Water Works Company including Carvins Cove after the electorate voted in favor of condemning the RWW Company and passing a $5M bond issue. 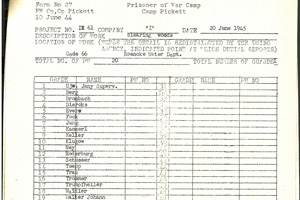 City of Roanoke voters approve at $2M bond issue to finish the Carvins Cove Project. German Prisoners of War housed in Salem clear the timber from some of the cove land during the spring of 1945. (Documents detail the German prisoners that cleared timber at Carvins Cove on June 20, 1945) 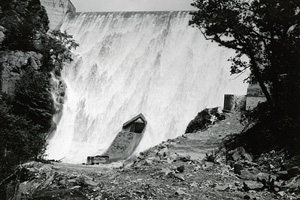 Water spills over the Carvins Cove dam for the first time as the reservoir reaches full pond. 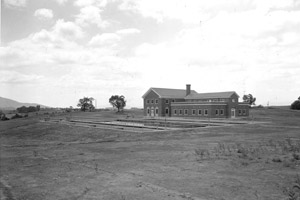 1954 The Carvins Cove Treatment Plant is expanded, increasing the plant capacity to 16 MGD.


November 18, 1966 The Tinker Creek tunnel under Tinker Mountain was opened to divert water from Tinker Creek to the Carvins Cove reservoir. The $1.25M tunnel has a maximum flow is 268 MGD. The difficulties encountered in purchasing land the rights-of-way were staggering.


December 3, 1974 Water flows through the 10,595-foot Catawba Tunnel with a maximum flow capacity of 355 MGD. The project cost $2,144,000. Land acquisition starts early as “the only ways to acquire property on Catawba Creek are by birth or marriage” states one landowner. 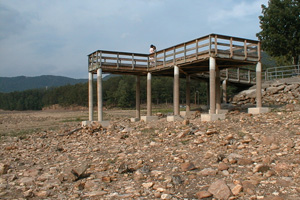 With the Roanoke region experiencing record drought conditions, Carvins Cove reaches an all-time low of 34.1 feet below the spillway.  Discussions between County of Roanoke and City of Roanoke leaders on ideas for best meeting the valley's water needs begin yet again

July 1, 2004 The Western Virginia Water Authority is formed to be a regional  water and wastewater service provider in the valley.   The Authority acquires ownership of the Carvins Cove Reservoir and land up to the 1,200-foot contour. The City of Roanoke retains ownership of the balance of the land, making it the second largest municipal owned park based on acreage in the United States.


September 14, 2009 The City of Roanoke completed the donation of a two-part conservation easement in Roanoke and Botetourt counties that permanently protected 11,363 acres of open space, making it the largest publicly-held easement in the state. The first part, 6,185 acres, was placed under easement in 2008 and the remaining 5,178 acres were placed under easement in early September 2009.  Today, Carvins Cove is an excellent drinking water source and recreational park.

September 10, 2014  The Western Virginia Water Authority purchases the last remaining privately held piece of real estate in the watershed to protect the reservoir from potential runoff.


More photos of the construction of the Carvins Cove Dam and Reservoir are available in our photo gallery .